Posted on April 11, 2019 by danielshumphreys

Fair warning: I’m going to spoil the identity of the monsters in Netflix’s original film The Silence. If only because going by the trailers you’d assume that they’re bats.

The ferocious little critters appear, in fact, to be some sort of evolved pterodactyl. Points for originality, as well as actually showing the monsters (casting aspersions on you, Bird Box.) 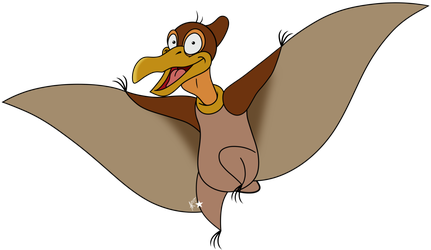 You got a nice flat head, Flathead.

The producers of the film missed out on calling the movie Attack of the Mutant Pterodactyls, but hey, we can’t have everything.

Things progress quickly from the discovery of the creatures (dubbed “vesps” in the early going, for their tendency to swarm like a species of wasps) during exploration of a long-sealed cave. We’re treated to a few scenes of the larger, ongoing disaster, but for the most part, the story focuses on the Andrews family. Stanley Tucci is great as the dad, here, John Corbett plays his everyman best friend, Miranda Otto plays the wife. The rest of the roles are filled out with character actors save for Kiernan Shipka in the role of Ally Anderson. Rendered deaf in an accident, her use of sign and the family’s knowledge of it helps contribute to their survival. The vesps have evolved to hunt solely by sound, and don’t even have eyes. This makes for some cool set pieces, and if it’s all a bit reminiscent of A Quiet Place, it’s important to note that the book on which The Silence was based came out before that other film.

Kiernan’s performance is good, if a little jarring because at certain points at the film I could swear she was Emma Watson. The resemblance is uncanny. Hermione Granger vs. the Mutant Pterodactyls? It’s a win.

All in all, it’s a fun, quick-paced little flick. My only complaints are as follows:

Overall, the family acts logically and their attempts at survival are well-reasoned. Given the effectiveness of a wood chipper in one scene, one wonders why that sort of thing couldn’t be deployed en masse. Big speakers and flamethrowers? Hey, it worked for my zombies in A Place For War.

The vesps’ life cycle doesn’t make sense. They got from seeming to have maybe a thousand in the first scene to huge flocks in a matter of a few scenes. We learn that they lay eggs in the bodies of their prey – are they reproducing asexually? What did they eat in the cave, without turning to cannibalism?

At the conclusion of the film, earlier hints about vesp-worshipping pay off with a group of survivors led by a creepy Reverend. He and his crew cut out their tongues to ensure they remain silent. The cult makes for an effective scare, but feels a bit ‘tropey.’ Considering the creativity in the monsters, that’s a bit of a disappointment, but the climactic fight between the Andersons and the cult is nice and tense despite all that.

So yeah, not a perfect film, but Stanley Tucci has always been one of my favorite actors, and this is well worth a watch if you need a post-apocalyptic fix.