Posted on November 8, 2018 by danielshumphreys

The films Alien and Aliens have been two of my favorites since I saw the first in 4th or 5th grade. This was the dark era (before Blockbuster) when new-release movies cost well in excess of $100 and rentals from the mom-and-pop video stores required a credit card or a canceled check on file. Both of those were out of reach for my precocious self, and as far as my mom was concerned, if I couldn’t check it out of the library, I didn’t need to see it.

This was a pretty major roadblock for me to actually see the sequel. There was a huge waiting list at the library to check it out, and that extended delay made for a truly momentous night when my reservation finally came around. I love the instant gratification of streaming more than probably anyone, but there’s something to be said for the sweet taste of paid-off anticipation. (Honestly, I think this is why the Marvel film universe does so well. They give us one or two event films a year and drop periodic teases in between to keep our jones going.)

In the comic store one day, I was ecstatic to find a collected edition of Dark Horse’s comic book sequel to Aliens. They released three volumes of that initial series, detailing the further travails and adventures of Hicks, Ripley, and Newt. Up until that point most of my comic book reading consisted of Spider-Man and the Punisher, so I wasn’t at all familiar with the long history of black-and-white comics, particularly in the horror genre. The first story arc of the Aliens comics, Outbreak, was originally presented in that fashion, and I still remember being blown away by the crisp details that medium allowed.

The new collected omnibus, alas, has colorized that arc, but it’s done in a minimalistic way that doesn’t detract from the otherwise great art too much. In the story, it’s a bit more than a decade after the events of Aliens. Hicks is a scarred and troubled drunk. While he’s still in the Colonial Marine Corps, he’s been in and out of the brig on charges and has become a true ‘terminal lance’ corporal. Newt is institutionalized, with the doctors struggling to ease her nightmares and hallucinations of past horrors with drugs and talk of surgery. It’s a slow burn story from there, and when I first read it I was disappointed at Ripley’s absence, but it works to help us become more invested in Hicks and Newt. Ironically, later editions of the comic retconned their names to Wilkes and Billy, after both died off screen in Alien 3. As far as I’m concerned, there are only two movies, and we’ll leave it at that. The latest omnibus, thankfully, changes things back to the way they should be, so this can be regarded as the true follow up to the original films. In many ways, it deepens the backstory of the xenomorph as well as the mysterious alien skeleton from the first movie. 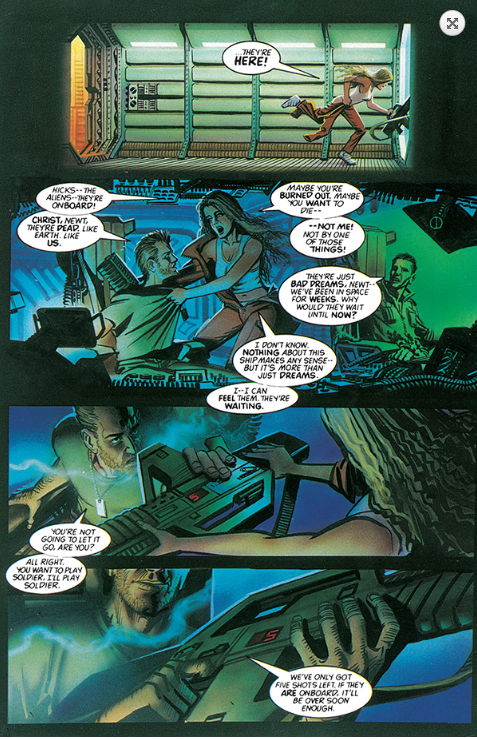 The art varies from book to book, but it’s generally solid. Outbreak and the second chapter, Nightmare Asylum, are good to great. Artist Sam Kieth took over duties for the final volume, Earth War, and it’s a mixed bag for me. In certain spots, his art is beautiful and haunting. In others, proportions seem strange or distorted.

All in all, though, the collected edition is well-worth the price. Fingers crossed for volume 2!