I got the chance to take an early look at Jon Del Arroz’s latest book, “For Steam and Country”, and it’s a dandy. If you’re into steampunk and acts of derring-do, the book is right up your alley. Jon is one of sci-fi’s up-and-coming new voices, and he’s a big proponent of keeping fiction fun. I think that’s something we can all get behind.

I asked Jon if I he’d be willing to do an interview to help promote his new release, and he happily obliged.

Hey, Jon, welcome, and thanks for being here. Why don’t you tell the readers a bit about yourself and ‘For Steam and Country.’

Happy to chat with you, Dan. Over the last year I’ve come to prominence in the SF/F world with my debut novel, Star Realms: Rescue Run. It’s gotten rave reviews and an award nomination, and as I’m quite vocal some have called me “the leading Hispanic voice in Science Fiction.” I love sci-fi, especially the space opera genre, but I wanted to try something a little different and have always been interested in exploring Steampunk. I feel like unlike other genres, there’s not been a ton of steampunk out there, especially in recent years, and this would be a good way to show my vision of what I think steampunk and fantasy should look like.

Steampunk is one of the more venerable sub-genres in science fiction, given that many include the likes of Jules Verne and HG Wells under its umbrella. What is your personal attraction to the genre, and why do you think it’s been so long-lasting?

I got excited about it when I happened upon a Steampunk cosplay ball at Dragon*Con in 2011. The costumes were so gorgeous it just spurred my imagination. Obviously I love both of the authors you listed, though at the time they were writing they were exploring what might have been very real possibilities in SF. Now we look at it as a alternate-past if steam had developed into different technologies, or fantasy that has a little higher level of technology than other fantasy worlds. Really the big explosion around 2011-2012 was what brought it back to the forefront but since then there hasn’t been a ton done with the genre on the book level. I think the themes and the tech like airships and gear-driven devices are extremely fun to think about.

As you mentioned, you’ve also written the acclaimed novel ‘Rescue Run’, which is a tie-in to the Star Realms deck game. From a mechanical standpoint, talk a little about the difference in building your own world versus playing in someone else’s sandbox.

Actually not a ton. I had a lot of leeway with Star Realms, and it was a joy to work with White Wizard Games on that. They had their four factions from the game that I had to work around, and I had to feature some named ships and bases for it, but with the card game having such light flavor I was able to expand from there and create a really cool world. This didn’t even have those constraints built in so it was a little more free on that end, but I sat down and made the relevant empires and developed from there as to what they’re like on the world-building end anyway. I’m very organized with my process in that regard.

For a potential reader who maybe hasn’t ever gotten into steampunk, what about ‘For Steam And Country’ would appeal to say, a fan of the usual ships-in-space tropes of science fiction?

I think there’s a lot of similarities between the two genres. Instead of starships you have airships. Instead of laser pistols you have guns. Instead of aliens with cool abilities, you have super soldiers who are taking a serum to enhance their abilities. What I kept to the core of is an action-driven story with a spiraling pace that keeps a reader hooked all the way through. If you like my space operas, this should still be right up your alley.

This may be a little inside baseball for some, but as a writer I’m always interested in the process. In the corporate world we call them ‘best practices.’ Like me, you have young children, so what are your ‘best practices’ in terms of writing that don’t involve duct-taping toddlers to the wall? (Not that I’ve ever tried that.)

I just write on my lunch breaks or after the kids go to bed. It’s impossible to get anything done with them around!

Awesome, Jon, thanks again for being here to promote ‘For Steam and Country.’ A’s – D-Backs World Series? (Jon is a Bay Area-resident and a die-hard A’s fan).

I believe that I will win a Hugo Award before that ever happens. 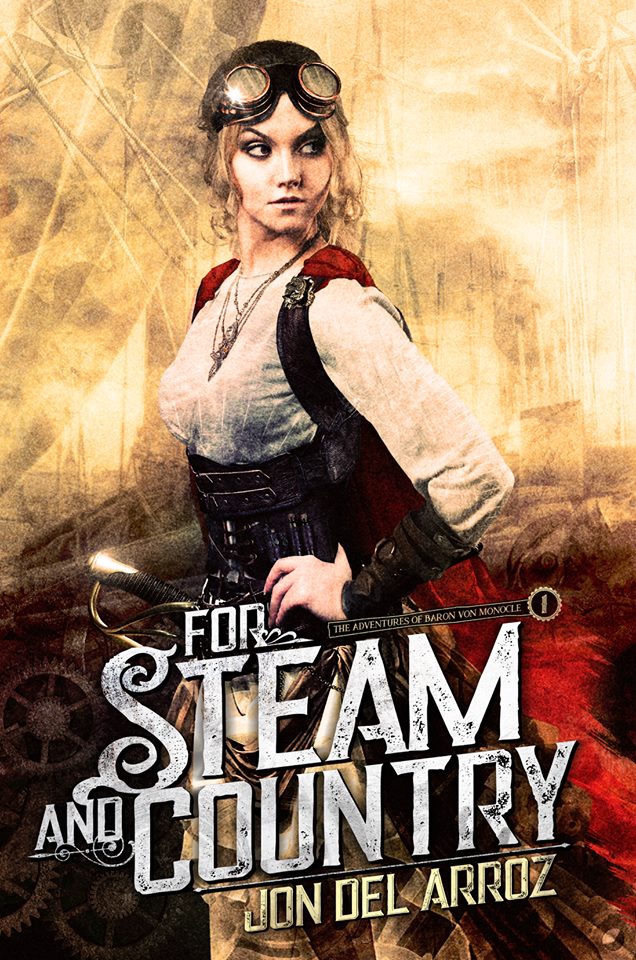 1 Response to New release day: For Steam and Country