If I had to rank it, it would be below Alien/Aliens, but slightly above Alien 3 (though the reasons to downgrade it are similar) but I’ll address that in the spoilery portion.

The crew was far more relatable and well-characterized than the crew of the Prometheus. There were some redshirts among the bunch, but there were more than a few standouts you were rooting for. I particularly liked Danny McBride’s Tennessee and Carmine Ejogo’s doctor character, Karine. Fassbender was flat-out amazing in both roles.

The pacing was solid. We open up into a normal day aboard the colony ship, which suddenly descends into catastrophe. This gives us a chance to get a look at the crew in a crisis situation, as well as to see how they deal with the aftereffects. The answer is some better than others, but the specifics of who and why will be important later.

The tension builds slowly to the climax, backs off a bit to let you catch you breath, then amps up again for a close that never really felt like much of a threat (more on that later). This is redeemed by a pretty solid, though quirky, ending twist. 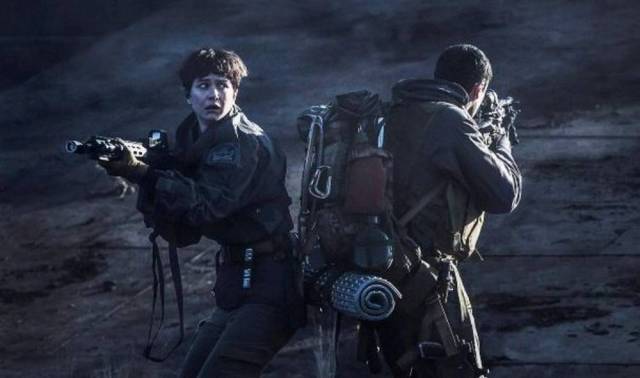 Covenant is comparable to 3 in that it kills off popular characters off-screen. Hicks and Newt are obviously nearer and dearer to our hearts than Shaw, but her treatment was kind of lame. And we never really get any insight as to why David did to her what he did.

A lot of the super-fans on places like AVPGalaxy are up in arms because David boasts that he’s created the perfect lifeform and has thus been put into continuity as the creator of the xenomorph. I think that’s premature for a couple of reasons.

First, based on the creature from Prometheus and some of the murals in the Engineer research facility, xenos, or xeno-like creatures are something they’re familiar with. So it would be a pretty huge coincidence for David to ‘create’ something that looked exactly like an existing Engineer bio-weapon.

Within Covenant the film, though, we get a pretty good glimpse of David’s laboratory. And it looks pretty much like a naturalist’s workshop. We’ve got sketches of lifeforms, preserved and mounted specimens, etc. All you need is a bug net and a magnifying glass to complete the ensemble. What we don’t see are any indicators of any sci-fi genetic research equipment. Sure, David could have been doing hybridization using old-school, pre-sequencing methods, but . . . I doubt it.

We have literally two examples of alien life on the planet other than all of the dead Engineers. The first are the spore pods that result in neomorphs, and the second are the standard facehugger eggs.

As far as the spore pods go, their distribution is so random that it seems fairly likely that they’re an anomaly caused by David’s bombing of the world with the black goo from the Engineer ship. As far as the facehugger eggs . . . it’s hard to say. Did David further expose Shaw to the black goo? Did the eggs come from her, akin to the squid-hugger in Prometheus? That would seem more likely than David engineering them, considering one big giveaway that on first blush doesn’t even really apply, but pays off later in a big way.

There’s a scene where Walter and David are looking over the plaza filled with Engineer corpses. David is moved to utter a few words from the poem ‘Ozymandias’. You could be forgiven for thinking this is a throwaway scene; something added to give the whole arrangement some gravitas. But it’s not at all, and it’s really quite masterful on Scott’s part. Walter completes the poem, and David intones, “Byron.” Scene.

The payoff comes later, when the two confront one another. Walter tells David that he may be in need of system diagnostics. David scoffs, but Walter reminds him that ‘Ozymandias’ was written by Shelley.

So David is – what? Losing his memory? I’d dare say that he’s lost his mind. Which is not entirely unfounded in the history of cinema, but . . . this is definitely a unique take. I’m wondering if the third movie isn’t going down a road where David realizes that he’s just coloring within someone else’s lines. For all his obsession regarding creation and surpassing one’s creator, in the end he’s just . . . tracing.

But that still leaves him as a spooky and formidable antagonist.

There are two sci-fi tropes that drive me batty, and they’re both badly abused here. The first is “let’s send the Captain and XO on the away mission” and the second is “gee it looks like Earth, let me not wear a helmet.” The latter is probably the most egregious one here, as Karine is literally doing soil testing when Mr. Redshirt stumbles on a spore pod while taking a smoke break (Ha! See! Cigarettes kill!)

I mean . . . drones are everywhere now, you can’t tell me they won’t be around, and better, a hundred years from now. But, hey – it is what it is. One way or another for purposes of story they had to get the crew down to the planet.

In the last act, after the surviving characters have gotten back to the ship and let their guard down, they’re surprised when one of their own is found to be infected with a chestburster. The ensuing sequence falls sort of flat. It’s already been established that the internal doors of the ship are segmented and computer-controlled. So yeah, it looks cool as Daniels and Tennessee herd the xeno into the cargo bay, but there’s never any real sense of threat to either of them.

I think part of this is the design of the ship itself. The Covenant is sparkly-shiny, with flatscreens and motion-trackers and cameras all over the place. There’s not so much a single rusty airshaft in the whole place. It’s not as jarring until you realize that this is supposed to be a prequel to Alien, in which the ship was almost as much a character as the cast itself. So either Weyland-Yutani is sending out antique junk on ore refinery runs (not beyond the realm of possibility) or it’s just a goof. Although you could argue that there’s little reason for a one-way colony ship to have so many bells and whistles.

In the end though, complaints and niggles aside, the movie is really good. I’ve been thinking about various angles of it in the couple of days since I saw it. It’s a huge and definite improvement over Prometheus. Hopefully the closing movie in the new trilogy will wrap up all of the plot threads and they can move onto stories set later in the timeline.

1 Response to Thoughts on Alien: Covenant