Posted on January 8, 2017 by danielshumphreys

The tagline I used for my review at Amazon was, “Dune and Firefly go on a drunken absinthe bender and wake up in Cthulhu’s condo”, and it fits. This is definitely a 5-star book. In a sense, it has a similar sci-fi/space horror plot angle to John Love’s Faith, which was trad-pubbed a few years back. That book for me was ultimately a disappointment, and I think the reviews on Amazon bear that out. If nothing else Nethereal kind of puts a point in the win column of indie vs. trad in that it takes chances that I don’t think a traditional publisher would let a non-established writer get away with, while also avoiding the art over story aspect that so soured me on Faith. 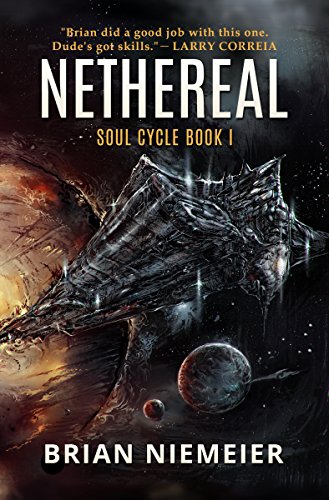 It’s hard to describe Nethereal without going into spoiler territory. Myself, I’m a guy who likes spoilers, but I went into this only knowing the genre, and that there were a couple of sequels out there. I’d like to grant you that opportunity as well so I’m going to avoid them as much as possible here.

As with most space-opera, we begin with the character archetypes. You’ve got your emotionally-withdrawn Captain nursing long-ago losses. You’ve got a hardcore female first-officer who keeps the crew in line and sometimes pilots the ship. The other pilot is a young guy, full of awe and wonder.

But just when you think this the crew of the Serenity in disguise, we get a little splash of a Dune-esque interstellar guild with an iron fist on the underlying economics of space travel, and they are after our pirates.

With the first-novel exposition out of the way, it’s full speed ahead as the crew of the find themselves shanghai’d into a venture by a group of separatists to help them on the maiden voyage of their newest ship. In a novel rife with Biblical allegory and folkloric shout-outs, it’s telling that the separatist ship has been named the Exodus. Unfortunately, they are going nowhere near the Holy Land . . .

This is the part of the book where we depart the comfortable climes of space opera and head straight into the black emptiness. Shades of Boyle’s Sunshine or Anderson’s Event Horizon? Oh, yes.

In a work that was full of twists and surprises, perhaps the biggest one for me was the conclusion, which did satisfyingly tie up the initial arc while leaving possibility for a sequel. There are real consequences, real triumphs, and real scares. Can’t wait to read the next one.